Bonnie ZoBell’s debut collection, What Happened Here, is a linked set of ten short stories and a novella. They share a neighbourhood, a history, and the glorious macaws that flit through the book.

On September 25, 1978, PSA Flight 182 collided with a private Cessna and crashed in San Diego’s North Park neighborhood, killing all 137 people on board and seven people on the ground.

In What Happened Here, this real-life disaster haunts the fictitious people who live on the block where Flight 182 crashed.

The book opens with the eponymous novella, which introduces the characters. This is a group of everyday working- and middle-class people, some who lived there when the disaster happened, some who are recent arrivals, most of them haunted in some way by the neighbourhood’s history. The novella revolves around a memorial thirty years after the event, and is narrated by Lenora, whose husband John plummets into depression as the anniversary approaches.

The neighbours struggle and cope with everyday issues and bigger psychological ones. The newcomers too, living in homes or on land where debris and bodies landed, are affected by the events that took place three decades before. All seem haunted by the spirits of those who lost their lives.

I found the novella to be a bit long, dwelling heavily on the aftermath of the crash, mentioning specific horrors many times—but then in real life, such events never go away for the people who lived through them. Instead, they play again and again on the inner movie screen of each survivor or witness. Deep psychological trauma lingers decades after a disaster. Through this realistic device, ZoBell draws the reader into the lives of her characters.

Not all the pieces deal directly with the crash. Rather they centre on the individual stories of the protagonists. Each of the stories struck me in a different way. Some I connected with more than others. Many of them are dark, the characters dealing with depression or bipolar disorder, like John in the novella. In Movement in the Wire—a sketch of a man still fighting the Viet Cong in his mind, and Rocks—about a woman who has escaped her abusive husband, (or has she?), characters deal with PTSD.

In A Black Sea, Alexa is in the throes of a relationship crisis. This story features escape as a theme. It also delves into magical realism, involving a chupacabra sighting. Yet this is not out of place in this otherwise realistic book; the wildness of the chupacabra both illustrates and encourages Alexa’s desire for freedom.

Sea Life, too, revolves around escape. When the main character, Sean, slips into a deep transcendental state, ZoBell paints both the seascape and the experience so well that the reader wants to be there with him.

Another tale about escape, Uncle Rempt was nominated for the 2010 storySouth Million Writers Award.

A gentle humour, including some lovely, well-chosen metaphors temper the dark legacy of the crash and the inner struggles of the North Park neighbours. In Nimbus Cumulus, one character has “a smile as long as the highway out of a dry town in Utah,” and in Uncle Rempt, the narrator’s uptight father has a bald spot that “looked like jail bars, black rows of hair across white skin.” In Sea Life, an incident in the water amongst local seasoned surfers left me both smiling and imagining myself in the same predicament.

I enjoyed this collection, and was interested to learn about the historic event, which I barely remember from the news thirty-seven years ago. I was too far away, in a different country, for it to affect my life. Zobell’s raw, unforgettable North Park characters and their stories, though fictitious, drew me to the internet to search for information. While reading about the accident and about North Park, I found myself recognising details from ZoBell’s meticulous rendering of the factual aspects of What Happened Here, details she has seamlessly woven into her book.

In a blog tour post at [PANK], Bonnie Zobell described why she wrote about the crash site:

I live only a half a block away from where it occurred. I also lived in North Park 30 years ago when it happened, but in an apartment further away. When it happens that close to you, it definitely has a lasting effect, as anyone who’s been through a catastrophe of this magnitude can tell you. It’s personal. It’s abundantly clear forever afterward that something can fall out of the sky at any minute and take away people you love and care about; that part of your neighborhood can disappear in an instant. 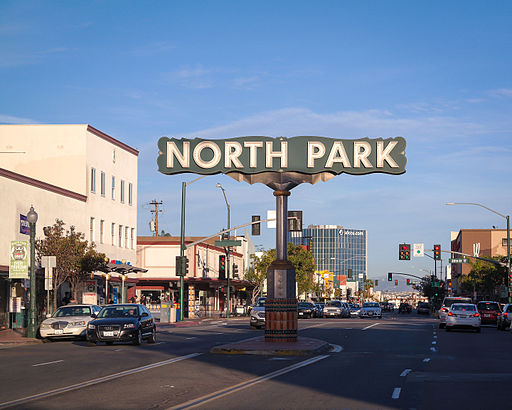 What Happened Here has won 1st place in Next Generation’s Indie Book Awards in the novella category. You can buy the book on the Press 53 website.

Bonnie ZoBell teaches at San Diego Mesa College, and is working on a novel.  Her chapbook, The Whack-Job Girls, was published by Monkey Puzzle Press in March of 2013. Visit her website, www.bonniezobell.com, where you can find links to her other publications, her blog, and more.

Chris Galvin is a Canadian writer, editor and photographer dividing her time between Canada and Viet Nam. Her essay Flood Season was a finalist for the 2012 Best of the Net prize, and Discovering Hến Rice in Central Việt Nam won third place (shared) and a Readers’ Choice Award in the 2015 I Must Be Off! Travel Essay Contest. Her work has appeared in various anthologies and literary journals, including Descant, Asian Cha, PRISM International, Room, and others. She has written in Vietnamese and English for Vietnam Tourism Review/Kham Pha Du Lich Vietnam Magazine, Travellive, and Du Lich Giai Tri. Chris is currently looking for a home for her recently completed manuscript, Breakfast Under the Bodhi Tree, a book about living, eating, and tour-guiding in Viet Nam.
View all posts by Chris Galvin →
This entry was posted in Book reviews, Books, Fiction and tagged Bonnie ZoBell, North Park, PSA Flight 182, San Diego, What Happened Here. Bookmark the permalink.

4 Responses to Book Review: What Happened Here by Bonnie ZoBell

What do you think? Cancel reply